Ladakh is the northernmost region in the Jammu & Kashmir State of India. It can be called a ‘Trans-Himalayan high altitude desert’ with minimum temperature in winters -20°C to -35° and hardly any rainfall. Leh, the capital, is at 11,500 feet (3500m).

The cold winters of Ladakh require heating, but trees and firewood are scarce here. However, 300 sunny days per year and high clear air make this one of the best regions in the world for solar energy. Since 1994 SECMOL has developed solar heated buildings and used other forms of solar energy to make its campus at Phey self-reliant.

Our campus is largely solar powered. We use solar electricity for all our heating, electricity, and pumping. The campus has two solar cookers and solar water heaters for bathing. Most noteworthy are the campus buildings, which stay warm through the coldest months of winter with only passive solar heating. 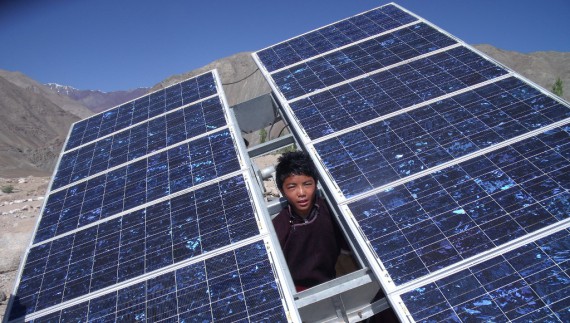 Photovoltaic panels generate all of SECMOL electricity for lighting, computers and TV. On sunny days we can even use carpentry and soldering tools. Batteries store power for nights and cloudy days, with a small generator for backup in case of extended cloudy weather or heavy usage. The campus is not connected to the grid or any other power. 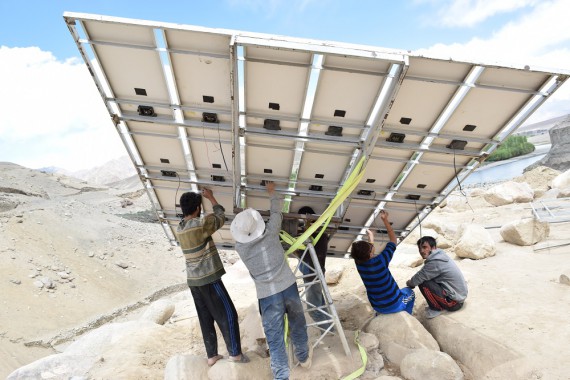 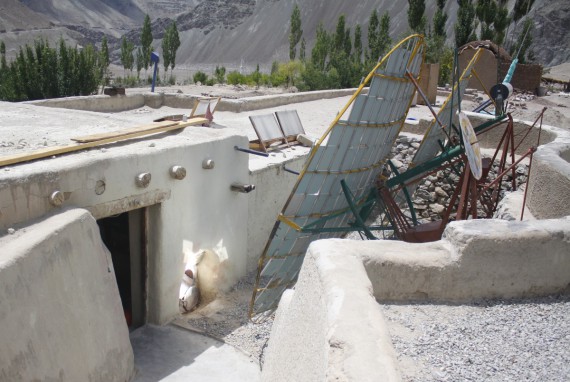 Two concentrating reflector-type solar cookers cook much of SECMOL’s food with the sun’s heat. They were assembled in 1997 by a group including SECMOL students at a local workshop under Swiss direction.

The large parabolic reflector is made of common mirrors, which focus the rays of the sun to a secondary reflector under the pots inside the kitchen. This design gives as much heat as a large gas burner, and saves a lot of money while preserving the environment.

We also have solar box ovens that we sometimes use for baking cakes, but they are too small to cook for the large numbers of people staying here.

This simple design has no pipes inside that can freeze and break, so it can be used all winter without draining. Since it is basically a large shallow tray, if it freezes overnight, nothing breaks, and in the sunny morning it simply melts and starts warming up again.

The bottom is a black tray that can hold two inches (5 cm) of water. It must be black to absorb the sun’s light and convert it to heat, and can be made either of sheet metal bent up at the sides to form a tray, or black pond-liner plastic (tough and UV resistant).

We find that 3 feet (1 m) is a good maximum width to allow maintenance without walking on the base, and the tray can be as long as you have space and materials. Our are about 18 feet (5 m) long.

We fill it with water in the morning, and by 12 noon it makes 100 litres of 45C water. Shallower will get hotter faster. A common toilet tank valve on the inlet pipe prevents overflow by automatically letting cold water in when warm water is drawn out, and cutting the supply when the water level reaches the desired height. 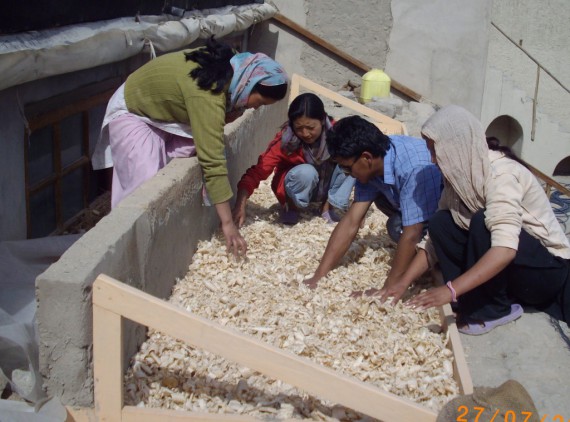 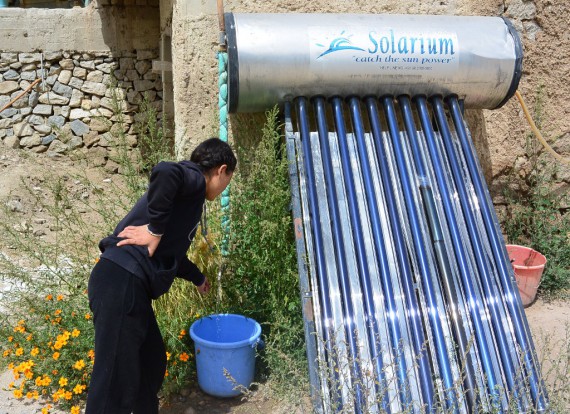 These water heaters were subsidised by the government for a few years. The glass tubes can heat water to 70C, or even boiling on a sunny day. Being vacuum-insulated, they do not freeze overnight in winter. We use them heavily.

We have been building experimental rocket stoves for the kitchen, that are extremely effective and efficient at using firewood and waste paper, but we have not been able to make them durable yet, lacking durable and heat-resistant materials such as fire-brick.

We also had a simple oven, an iron box installed in the wall, with the bread-door facing in towards the kitchen, and the firebox door under it, outside. The cook was able to start a fire, heating the surrounding earthen walls, the iron sides of the oven, and the stones or sand kept in the bottom of it as thermal mass. Then he would put the dough in the oven and keep a small fire going to maintain the temperature. We remodelled it to use the rocket stoves’ exhaust heat, but they are so efficient that their smoke wasn’t hot enough to bake bread. We’ll be rebuilding these soon.

Biogas is popular in the plains of India where the climate is hot or warm all year, but it hasn’t been used in Ladakh before. The slurry of cow dung and water has to be about 30 – 35C in order to digest and produce methane, and of course Ladakh’s climate is not at those temperatures. We will be able to heat the slurry with solar heat to keep it warm enough, at least for 8 months of the year. Our first model did produce gas piped to the kitchen, but then our low-cost plastic film tank got small holes, so we are working on a better material. Having three cows, we should be able to get enough cooking gas for a typical family, which will provide a convenient complement to the biomass and solar cookers.

Why not wind and hydro yet?

Visitors to SECMOL sometimes ask if we have tried wind power or water power. Someday we surely will, but solar power is much more effective and cost-efficient in this climate, so we haven’t done those yet.

One issue with wind at this altitude is that the air is only 70% as dense as it is at sea level. There’s less air here! Also, we get very strong gusts some afternoons, but mornings and nights are calm, so a wind installation is likely to sit idle much of the time.

Water power will be a bit difficult at this location because although we are next to the big strong Indus River, it flows somewhat level past SECMOL so we will not have any fall (head), which is the best way to get power from water.

Videos about solar energy at SECMOL

Film 20 min. about a course at SECMOL in 2013 called the Apprenticeship on Sustainable Sanitation, Passive Solar Design, and Earth Building Construction.

Article by a former volunteer about the green campus.